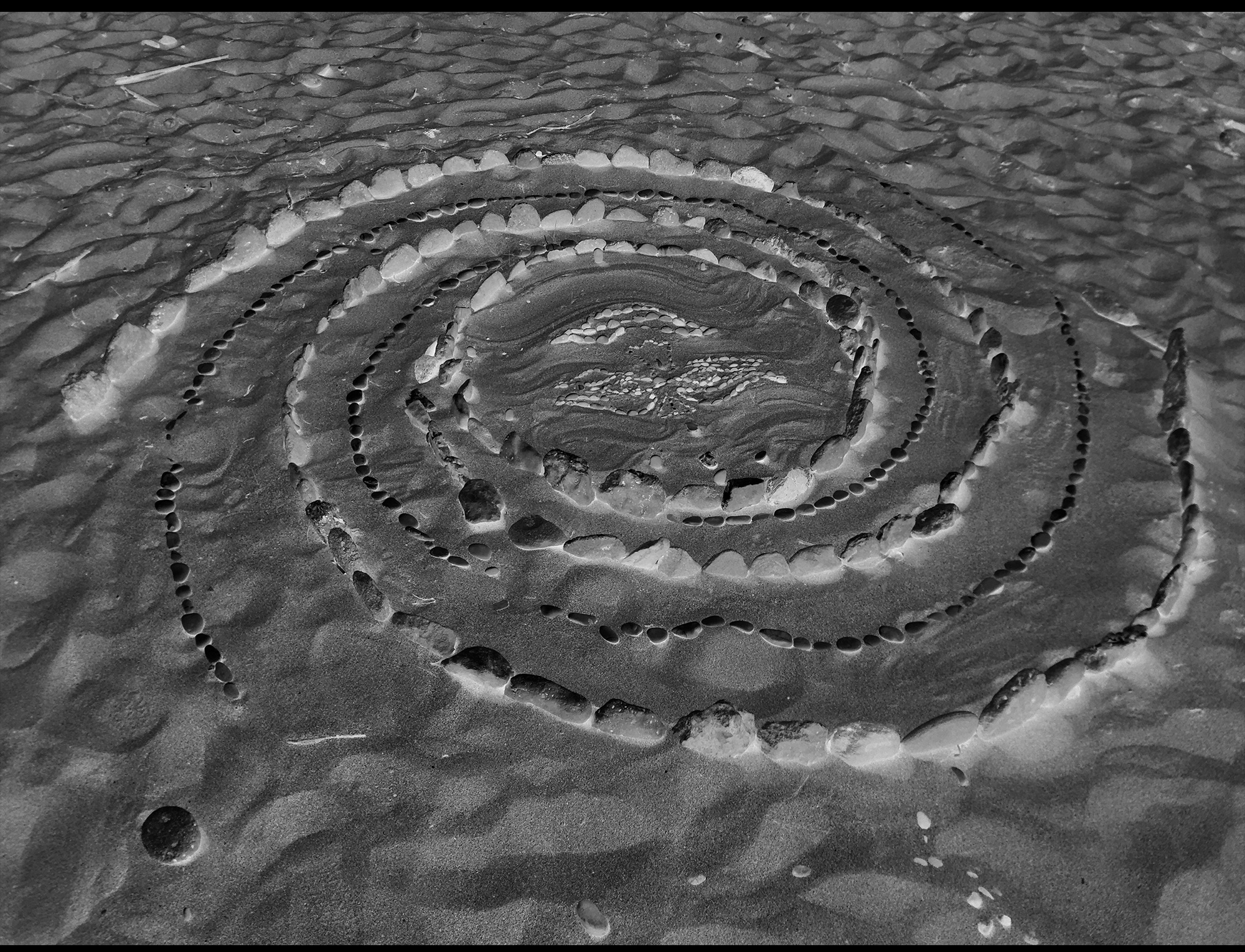 THE LABYRINTH
THE WITNESS
Labyrinths are perplexing entities, shifting constantly between polar opposites. Depending on the position one witnesses the labyrinth from, they can represent both order (when viewed from above), or chaos (when experienced from within). They can imprison, but also offer a domain of liberation. One can get lost, but also find themselves.

THE MUSEUM
As a teenager, I grew up in a city by the sea. It wasn’t a small city, but it sure was conservative. Growing up, it was unthinkable to show my affection to other boys freely in public space; the normalization of gendered violence was a significant aspect of what constituted the local masculinities, so avoiding provocation was the safest way to exist.

However, queer desire always finds its ways. The old center of the city was a labyrinthine collection of Venetian city walls, ruins, deserted parks and premium plateaus overlooking the city. They would allow us to feel protected and in charge; through the years, we had collected an incredible amount of secret locations where we could hang out, fall in love or make out freely. Passers by would sometimes glimpse at the image of two underage faggots on top of a structure, but they had no way of knowing how to get there. We were safe™.

The building itself was the main benefactor of this fuckfest. One would attempt to design a building dedicated to cruising, and still fail to match the grandiosity of that museum. In total, three or four external staircases allowed access to various plateaus, while the building’s plan carefully hid them from each other with walls and square volumes. One of the staircases led to the terraces of the building, which were divided themselves in three distinct areas with walls and differences in height, in order to maximize the separation of private spaces. Next to the stairs, there was an unfinished section of the building, which was literally designed as a maze of dark corridors and tiny rooms. I would never go to that specific section; too creepy for me.

The whole building would serve as a barrier between the city and the spaces of action, as most of them were located behind it, facing the sea. Needless to say, no public lighting was in operation; as the lights of the city were blocked too, most of these spaces were completely dark.

This is where I had my first gay kisses, where I found out about polyamory and ethical sluttiness, where I realized that the urban environment can offer something more than shopping streets, cafeterias and plazas. It’s also where my love and deep interest for the labyrinth-as-utopia first developed.

Bonus fact: As an architecture student, I had the surprising experience of working closely with the architect of the building. He would often talk passionately about the project, its difficulties and successes. For a whole year I was trying to find a way to politely inform him of the other success of his design that had completely slipped his attention; I never did though. After all, cruising space are usually unexpected byproducts of urban design; better leave them be. 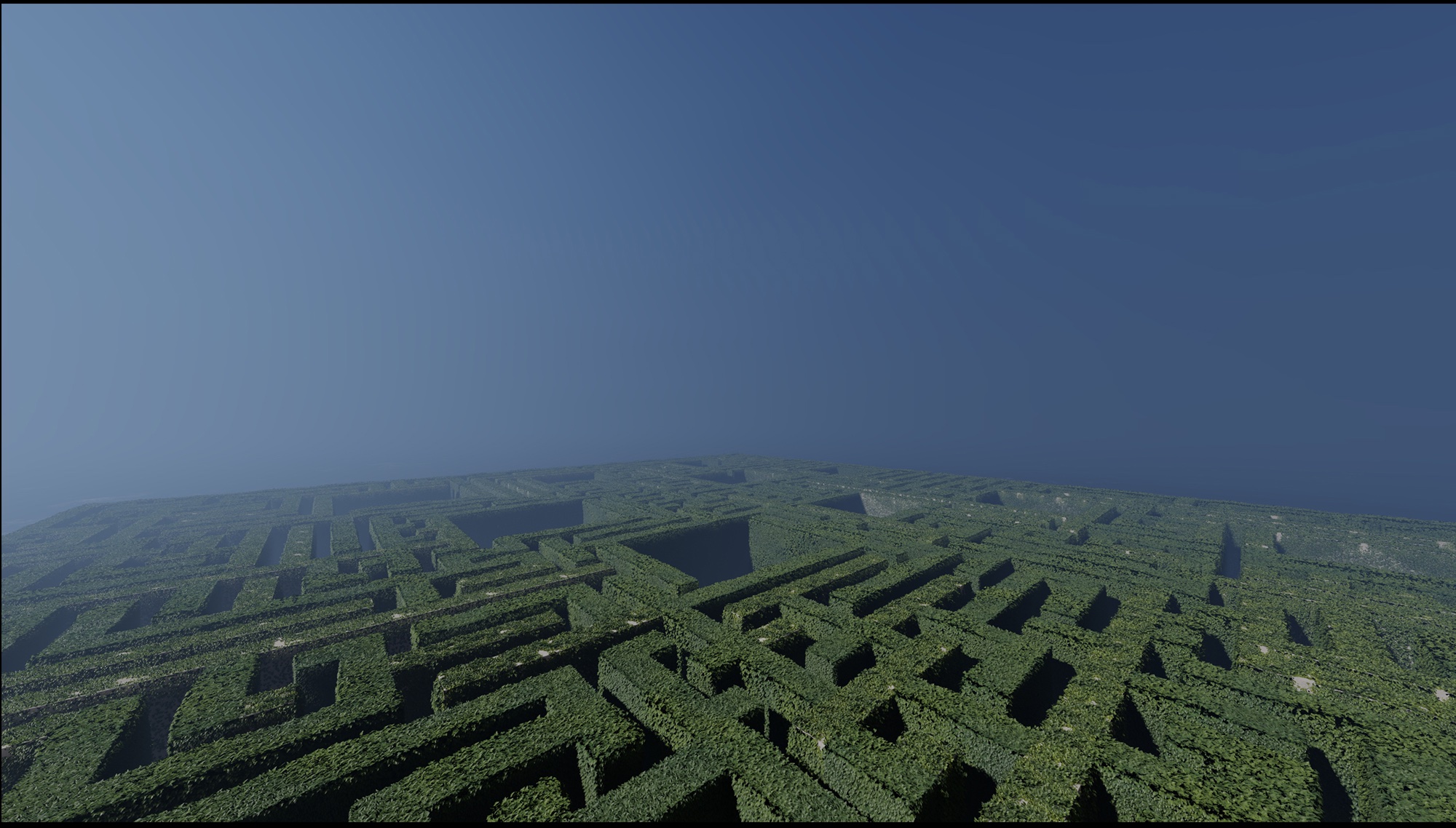 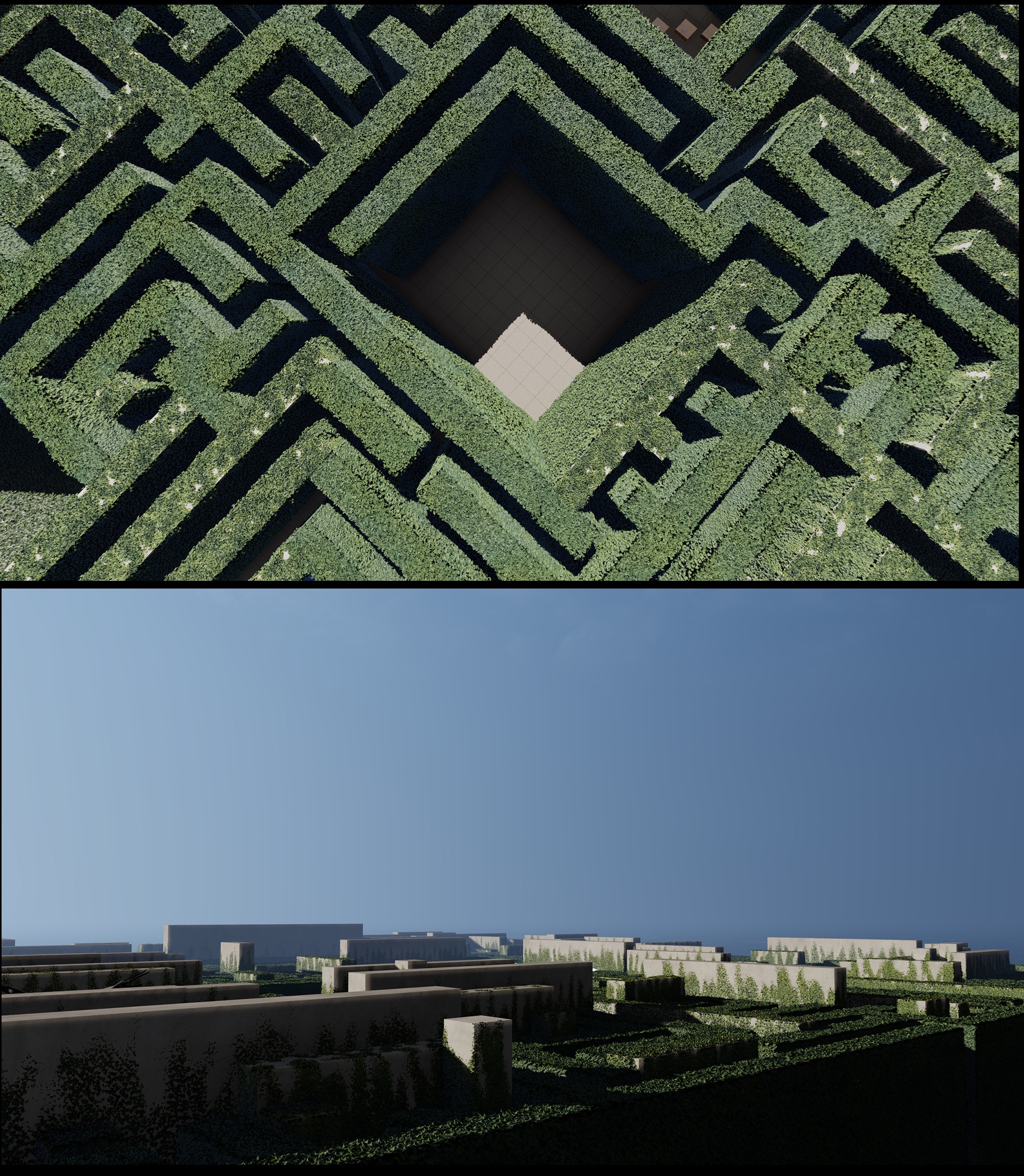 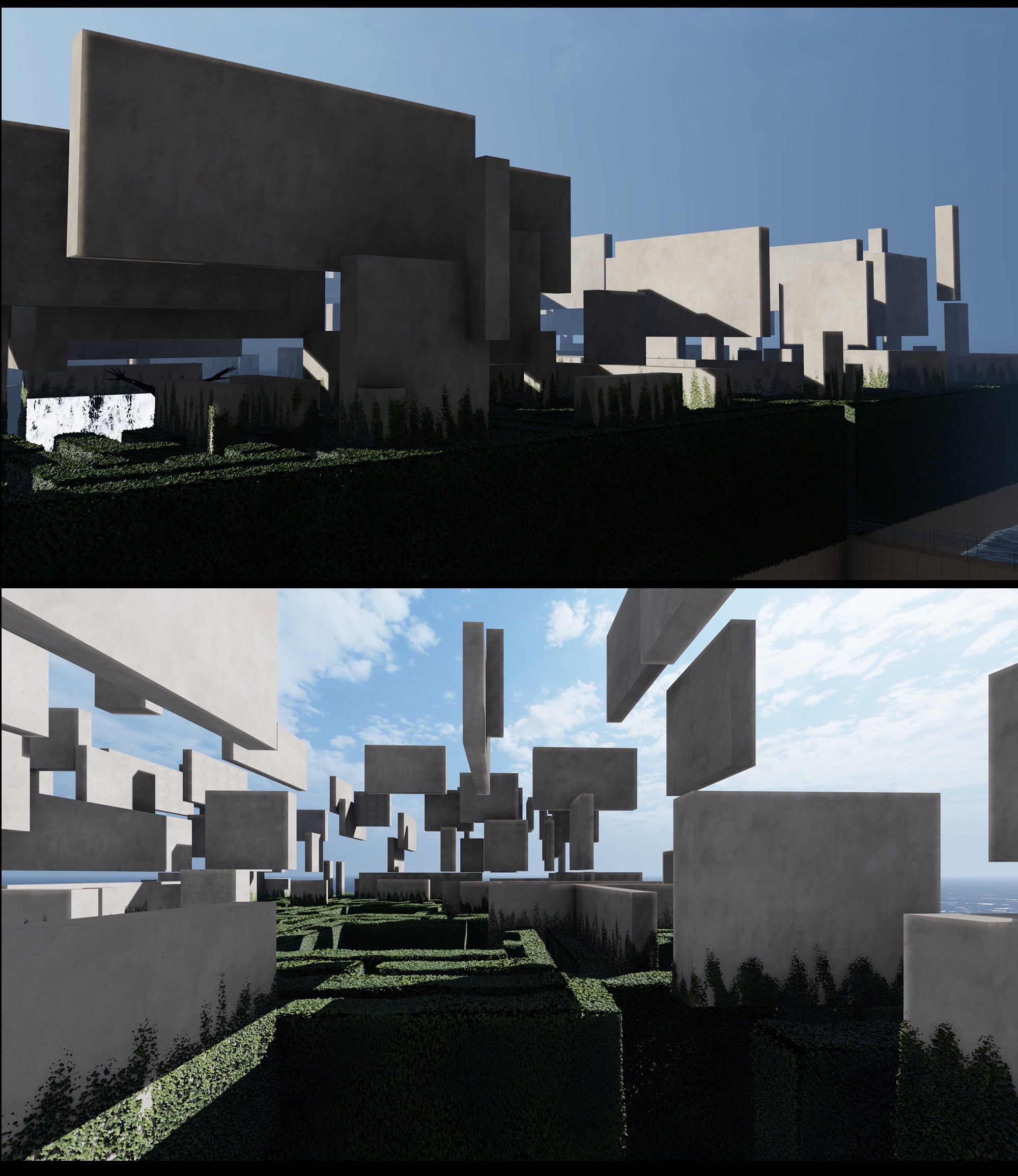 The Project
“Room B: The Labyrinth” is an attempt at imagining a world where the Labyrinth – with its complexity, ambiguity, freedoms, dualities and contradictions – consumes everything. Through music, GIFs, 3D sketches from above and renderings from within, the viewer is invited inside the hypothetical megastructure with a faint promise of an exit on the other end. This promise is soon retracted; the exit leads only to the next entrance; the sky is but a mirror; the other inhabitants are only shadows of their former selves, the walls keep shifting while the Labyrinth in its totality stays intact.
Inspired by:
Penelope Reed Doob (1992), The Idea of the Labyrinth: from Classical Antiquity through the Middle Ages, Ithaca and London, Cornell University Press
José Esteban Muñoz (2009), Cruising Utopia: The Then and There of Queer Futurity, New York and London, New York University Press
Tim Dean (2009), Unlimited Intimacy: Reflections on the Subculture of Barebacking, Chicago, University of Chicago Press

ABOUT THE CORRIDOR
“It was a tight corridor” is a project focused on the artistic process of worldbuilding and its documentation. Eremus – the project’s visual artist – collaborates with two DJs to imagine, describe and co-create a dreamlike condition of playful intimacy; a cruising utopia in the making. Using sound and music as a starting point, three imaginary spaces of play are created and presented digitally through a series of artefacts; the artist and the DJs will find, collect and construct various manifestations of these three spaces in the form of objects, sketches, texts, architectural plans, 3D models and video explorations.

“It was a tight corridor” is a project co-produced by Qreclaim and Art Dream Foundation. 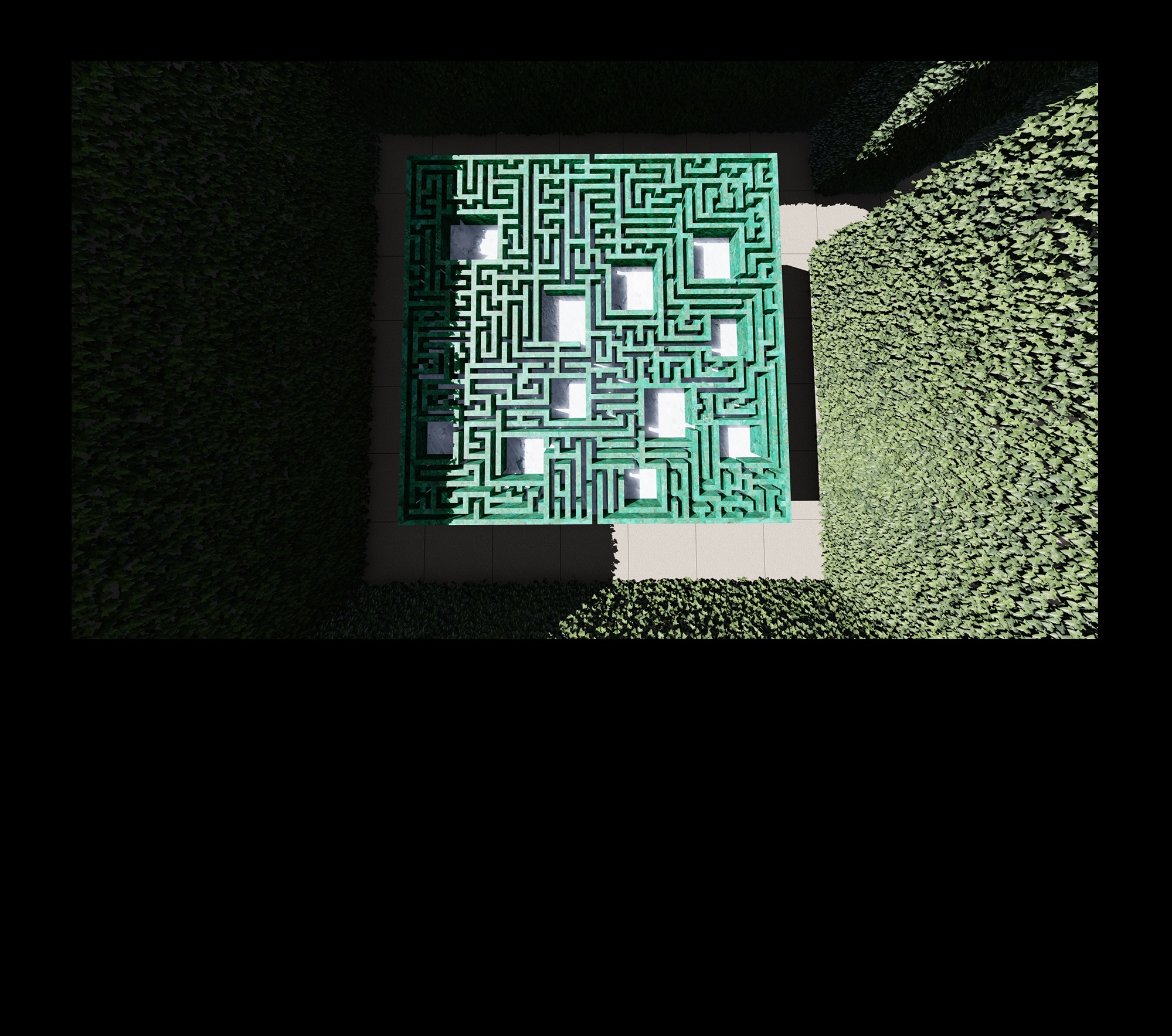